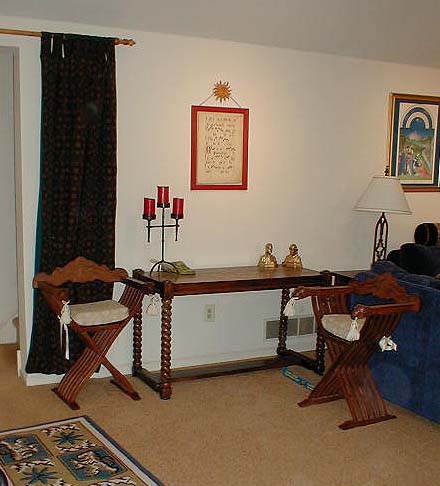 For those who like stories of King Arthur, or people who are fascinated with a world long past, there is no reason not to Medievalize our own homes.  The trouble lies in:


The most famous era for adapting medieval decoration to the household was the Gothic Revival, which more-or-less peaked during the Victorian era.  This period of time saw the blossoming of interest in the Middle Ages as a source of inspiration, from churches to chairs.  It continued with the efforts of the Pre-Raphaelite Brotherhood (and similar inspired women) of artists, up through the Arts & Crafts movement which widened into the graceful forms of Art Nouveau (far less medieval, but still romantic) and the Mission/Craftsman style of the early part of the 20th century.  I mention all of these different artistic styles because you can find items that are medieval-ish inside each group.  Careful selection will allow you to build the look you're hoping for.

An excellent example of Gothic Revival is Cardiff Castle in Wales.  (The site is confusing; go to "The Present" and then "Photo Gallery.")  The interior shots are amazing, such as the "Winter Smoking Room."  There's also a lot of more modern Gothic revival (and actual medieval artifacts) at Hearst Castle -- see the lampshade at the end of this page.

You could contrast these images of Victorian Cardiff with the Ricardian's fascinating reconstruction of Barley Hall.  Go through the Virtual Tour: you'll see that Gothic Revival is  very, very different from Medieval Reality!

You can go with the Victorian tomes, such as the authors mentioned in the link above about Gothic Revival, with images from medieval manuscripts, or more modern sources, such as the books Constructing Medieval Furniture and Medieval Needlepoint.

You should decide what level of Medievalism you want.  There are a lot of items sold as "medieval" that would be more accurately described as "20th century."  Not to say that they are not nice pieces, but they haven't anything in common with the Middle Ages except for the name.  One site I found which advertised medieval items had *nothing* similar to anything that I had ever seen in archeology books or medieval illustrations.  You may also want to decide if you want some silly medievaloid items, such as this cat castle.  Or you may want to go for the Victorian version, which I'm rather fond of as well.

To some people, medieval decor looks "churchy."  This is because most surviving examples (or imitations) of medieval architecture are in gothic style churches.  However, like the chalice, which was initially used for regular drinking, this is only because the Church continued using the older style far longer than the secular world.

If you wish to be more toward the accurate side of the scale you should familiarize yourself with medieval items.  Overall accuracy isn't needed, but a candlestick that looks very medieval will contribute more to the overall look than one that is only somewhat medieval.  Early medieval seems to involve a lot of bright painting on walls, but I have been unable to find good sources to share with you.  Here are some later medieval interiors from contemporary paintings.
These links will open another browser window so you can read and look at the same time.

Apparently, there is a minor resurgence of interest in medievaloid furnishings; a large decorating magazine is about to come out with an issue on it (Feb-Mar issue of Classic American Home), and an online magazine has contacted me about some of my material on the subject.  The market may soon be flooded with medieval items.  All to the good, I say, but be cautious: a lot of these are likely to be rough and unfinished.  It's clear from what survives that the best of Medieval art was elegant, finished and sophisticated.  Caveat Emptor.

In addition to making your own, medieval items can be bought from many commercial sources, although a lot of them, such as Design Toscano, sell "interpretations" of medieval stuff and modern Goth items, rather than reproductions of medieval things.  You'll be better off with museum gift store catalogs, but sometimes the non-museum folks have good things.  Check out Past Times, Art & Artifact, Boston Museum of Fine Art, Art Institute of Chicago, etc.  There are also people who make furniture to order, some medieval.  Some of the catalogs that sell rugs will also sell tapestry reproductions -- shop around; some are much less expensive, depending on the seller.  Websearches will turn up a lot of sources.  Don't neglect art prints of tapestries, which will be much more faithful to the original than a woven fabric version.  And much cheaper. (Say, $30 instead of $400 for the same size.)

Stop by a fancy fabric store with a "tapestry" section, such as Calico Corners, or the fabric section of Ethan Allen.  They are unlikey to have "picture" tapestries, but will have millefleur, medieval animals, etc.  These fabrics can be ordered as yard goods and used to put medieval flavor around -- pillows, throws, etc, for not too much money; yes, the fabric tends to run about $25-50/yard, but you can get four large throw pillows out of just one yard of fabric.  Even cheap throw pillows (say, at Bed, Bath & Beyond) will cost you $20 - $40 each; making your own is a bargain, and you could buy the fabric with a friend and share it.  I hope to get some photos of samples from these fabric stores to post here, so that you can print it out and take it to your favorite fabric store.

Last, but not least, there are medieval recreationist suppliers that do more concentration on this era.  Not all of those listed through the Juried Merchant's List are excellent, but there certainly are some good ones there.  I particularly like Historic Enterprises, Gaukler Medieval Wares, and Billie & Charlie.  Most of these folks do jewelry and clothing, but sometimes have household items.  One lady contacted me; she makes tiles in medieval patterns.  Don't ignore trying to find what you want on the Web!

Other Web links: Essay on medieval folding chairs. Compilation of links about medieval lighting -- lots of pictures of extant items.  Here's the BBC's own version of how to have a gothic interior.

It's Only My Opinion:

Walls: Some folks like making the inside of their houses look like exposed stonework.  My belief, based on the images of noble and middle class houses from the high middle ages, is that this was not a desired effect -- the desired affect would look much like white-painted wallboard or plaster!  Possibly with half-timbering in it.  So that's the look that I'm most interested in.  You can find webpages about how to do this, if it's what you want.

What to put on walls: Medieval folks would have had hangings from floor to ceiling, if they could afford them; either plain or colored fabric, or full-scale tapestries if they were very wealthy.  I am not so partial to that look, so I'd rather have prints of medieval tapestries or illuminations.

About tapestry reproductions: You can buy small tapestry panels, but I'm also not enamored of them.  Why?  Because the effective image quality is terrible. This may be difficult to explain.  Think of a 10-foot-high medieval tapestry.  It's been woven very finely.  Then you take this image and shrink it down to 3 feet high, but the threads aren't much smaller than the original.  You now have a very "pixilated" version of the original image.  That's why I'd rather have a print of the original than a small-scale fabric copy.  Actually, what I'd really like to have is a 10-foot-high photo of the tapestry printed onto canvas, so I could hang it like the real one, but although the set designers for Harry Potter seem to have found one for the Gryffindor common room, I don't know where I could find one myself.  And it would probably cost too much money, sigh.  So good-quality paper prints, it is.   (I've written a new page all about tapestry reproductions, posters, with examples.)

Sometimes you can find prints very cheaply.  I have a piece of christmas wrapping paper that is the Mon Seul Desir tapestry, which a friend found; I think he got several sheets of it for about $5. (Look for these in the wrapping & stationery departments of high-end department stores like Macy's.)  Sometimes you'll find wrapping paper with calligraphy on it; you could put such a thing on a lampshade to imitate the Hearst Castle use of manuscripts (left).

I also have some brass-rubbings in frames, which would have probably horrified a medieval person - they're for a grave, for goodness' sake!  But they don't have strong funeral associates for modern folks anymore, and often have interesting images.

Don't get discouraged.  I collected these things bit by bit over at least 10 years.  Buy something you see if it suits you, and is good quality, and you can manage to afford it.  If you really love it, eat scant for a month if the budget is tight.

Don't worry too much about being totally medieval.  The Victorians made a lot of choices that seem very silly to us today, but they liked the effect.  It's your house; if it makes you happy, go with it.